SWIMMING WITH THE FISHES 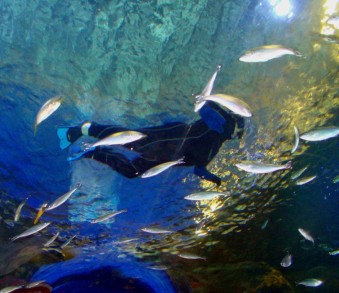 Minnesota has plenty of water sports in the summer, and many visitors come here just to visit one of our thousands of lakes for swimming, boating or jet skiing.    Others who visit prefer an indoor experience, such as shopping at the Mall of America.  Why not combine the two?  Visit the mall to shop, ride the rides at Nickelodeon Universe, and — snorkel?  At the mall?  Yes, you can do that at the Mall of America’s SEA LIFE Aquarium.

SEA LIFE offers three snorkeling sessions on Friday, Saturday and Sunday and they limit the snorkelers to four per session which gives you space for peaceful contemplation and communing with nature.  We went in the first group on a busy Saturday, which was probably the best slot as we got into the pool early and got a few extra minutes, which you will want.

Fellow snorkelers included my 9-year old niece, and a mother/son pair visiting from Nebraska.  They had a bit of snorkeling experience already, whereas my niece and I did not (I did this snorkel adventure as a prelude to my trip to the Galapagos).  We snorkeled in the rainbow reef section of the exhibit.

The first part of the class was an orientation by our snorkel instructor to the “dangerous” fish, such as the blue regal tang, yellow tang, pufferfish, a fish with a long Hawaiian name nicknamed “Clyde”, and yes, sharks. Small, two to three foot-long sharks like the brown banded bamboo shark.  The fish all have various defense mechanisms that really weren’t a threat to us as long as we didn’t try to pet them.  Even the sharks weren’t likely to harm us unless we grabbed one, turned it onto its back and shoved our hand into its mouth. We promised not to do that. 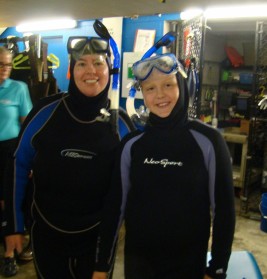 We were then oriented to the pool where we would be snorkeling and shown rock ledges we could sit on, fake coral we shouldn’t stand on and given some pointers on snorkeling.  Then we suited up.  All gear was provided – wetsuit, fins, gloves, hoodie and of course the face mask & snorkel.  The water is cool – about 78 degrees, but the suit keeps you warm and the gloves keep you from cutting yourself on the rock ledges if you grabbed them.

One by one, we sat on the edge of the landing and practiced putting our face in the water and breathing through the snorkel before pushing off.  I was last and pretty nervous. I never liked putting my face in the water because I couldn’t open my eyes and I couldn’t breathe.  I hesitated initially, but when I finally dipped my face in the water and opened my eyes – wow, I could clearly see a whole new world under there!  And breathing with the snorkel felt natural and I had no issues except the nose part of the snorkel would fill with water because it wasn’t tightly sealed.  However, since you breathe through the snorkel and not your nose that didn’t hamper me.  So I pushed off and swam among the fishes for the next half hour or so. They recommended not trying to swim by kicking a lot, as the fins we wore weren’t really good for swimming, plus we weren’t doing any diving down (the suits were too buoyant and we could hit our heads in the ledges coming back up).  You either moved by swimming with your arms, or just floated.    The best thing to do I found was just to float on the top of the water.  If you splashed around, you just scared the fish away, but if you stayed still they would swim around you.

Even with only four people in the tank, it sometimes felt a bit crowded and we bumped into each other occasionally.  The exhibit we were in had two sides straddling the walkway where visitors to the aquarium could gawk up at us as well as the fish.

We would occasionally come out of the water and sit on a rock and drain water from our masks and talk about what we were seeing, but soon enough we were back in the water for more communing with nature.  As much as you want to, you shouldn’t smile while snorkeling, you’ll likely end up with water trickling into your mouth as you’ll break the seal around the snorkeling.

The entire experience was quite peaceful actually, floating there in the quiet, watching the fish swim around and below you and feeling a part of nature.  Our half hour of actual snorkel time went by real quick and i could easily have gone on longer.  For someone like me, who isn’t a great swimmer, it was an easy and enjoyable activity.

As a bonus, none of the fish we were snorkeling with are found in Minnesota and all the fish would not normally be found together in the wild, so it was a truly unique experience.

interest in us and kept swimming by, and we’re pretty sure one bumped into us at one point.  Our instructor, who sat at the side of the pool the whole time in case we needed assistance, said the sharks don’t see well and probably didn’t know we were there.  She also said one of the sharks like to sit in the keepers’ laps when they are sitting in the exhibit.  At one point during the snorkeling I almost touched a shark by accident when I was reaching out for one of the rock ledges and a little shark suddenly flew up under my hand.  My niece was ecstatic and wouldn’t stop talking about it later.  So it was scary snorkeling among the sharks, but they were harmless. 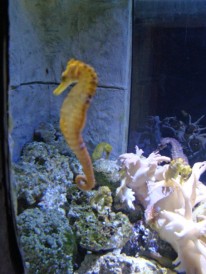 There is a very small place to change and shower afterward.  Snorkelers also get a souvenir picture and free admission to aquarium and the rest of the exhibits which include jellyfish, sea horses and stingrays, which you can feed for a nominal amount. You get a piece of shrimp and fish for feeding, and the stingrays all crowd around the edge of their pool to get the treat. They also offer a scuba experience and back stage tours.

If you want to go: