Monasterboice is a monastic ruins from the 5th century, about ½ hour north up the M1 from Dublin. The M1 is a toll Monasterboice is out in the middle of nowhere, but well signposted so easy to find. There is no entrance fee.

Monasterboice was reputedly founded by St. Buithe, a follower of St. Patrick. Monasterboice is actually a small area within a cemetery. It is known for its three high crosses which are in great shape and highly detailed. Crosses may have been used to tell bible stories to a congregation. The high crosses depicted biblical scenes like Adam & Eve, Cain & Abel, the crucifixion, the three Magi, David & Goliath, the resurrection & sacrifice of Isaac.

Monasterboice also has a round tower which church valuables were hidden during invasions. The round tower, and all the books and valuables, were burned in the 11th century.   Round towers have quite an interesting history in Ireland.  They were used as watchtowers, bell towers and protection for the monks and the church valuables during the times Ireland was raided by the Vikings. The entrance to the round tower is high off the ground and a ladder was used to gain entrance to the tower.  Once everything was secured inside, the ladder was pulled up and into the tower.There are also ruins of two churches that historians believe were built no earlier than the 14th century.

I had the place pretty much to myself for a while until 2 tour busses came up. The graveyard was sad to explore – a lot of children buried there. 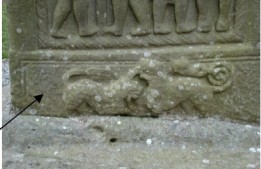