The ring begins in the town of Dingle and circles around Dingle Bay and hugs the ocean.  We traveled through pouring rain from Kenmare to get there, but the minute we crossed over the mountains into Dingle, the rain stopped and the sun came out; we had a beautiful day for the drive.

There are a number of pullovers on the drive where you can take in the views.  The following are some recommended stops for viewing on the tour:

The drive also includes old archaeological ruins, some sitting on private land.  We had to pay the owner of the land to see most of the ruins, as the landowner is required to maintain the historic site, but is not paid by the Irish government to do so.  Most sites are well worth the few euros entrance fee or the requested “donation”.  The following are places we toured that I would recommend:

Dating from approximately 8th century – now mostly a ruin and slowly falling into the sea (according to pamphlet we received).  It consists of the fort itself, four ditches and five mounds.  The entrance was flanked by two guardrooms.  The remains of a Clochan (a hut) are inside the fort.

The famine houses were homes where poor Irish farmers lived during the potato famine and date to approximately the 1840s.

This stop had animals as well, such as a Kerry horse, a little Connemara pony and an Irish red deer who took an abnormal liking to me.  He followed me up and down the walking path. When I turned down another path then returned, he was watching for me and quickly ran to the corner of the fence to meet me. Then he’d stick his wet little nose through the fence at me.  Poor guy.

These huts are little circular stone homes resembling beehives.   They dotted the hillside along the drive and there are several places you can stop to stroll through them.  One of the sites had a sign indicating the huts appear to date from prehistoric early Celtic times and many times were used by monks for retreat.

A little stone church from the 8th century with an inscribed pillar along side of it.  The oratory is built of stone without mortar.

The monastery is mostly foundation now, but contained several gravestones and carved pillars and the foundations for beehive huts the abbots lived in, an oratory, and a burial ground.  According to signs on the site, there are at least 10 stone, cross-inscribed pillars decorated with a spiral design.  The oratory is on the east side of the site, with the burial 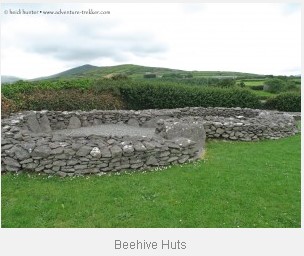 Dates from the 12th century, it is consider the most important church site on the Dingle Peninsula.