Just south of Grand Marais on Hwy 61 is Cascade River State Park, where there is an easy walk (300 feet) from the parking lot to a really nice waterfall (Cascade Falls) on the Cascade River.  There, we met a woman carrying a Bichon Frise under her arm, who said to continue on the path as we’ll come to a bridge where there are more waterfalls.

The “path” consisted of two separate and long flights of stairs, straight up, with a short flat path between that led to an overlook.  It may be a bit strenuous for some folks.  When me and my numb legs got to the top of the 2nd flight of stairs, however I found a series of three waterfalls (the cascades) in a vertical line, so it was worth the climb. 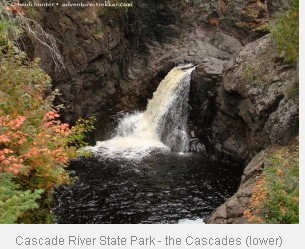 According to an informational sign on the site, the water is brown due to water coming from bogs and swamps that drain into the river.  The decaying matter from the bogs and swamps releases humic acid, which colors the water brown.