We took our final trip “up north” for the year at the beginning of October.  We were hoping to see some fall colors, as the leaves were just beginning to change, but we got more than we bargained for with the wild weather we encountered along the lake shore.

We’ve been to Duluth, MN many times over the years.  The boardwalk is great to stroll in the summer, and it’s fun to wave as the large ships go in and out of the harbor.  However, that wasn’t the case earlier this month.

When we arrived, the North Shore was experiencing “weather”.  A storm was coming in, kicking up large waves you could practically surf (no surfers, but we did see some kayakers).

Roiling waves splashed onto the rocky shore, completely soaking the boardwalk so you couldn’t stroll along it. There wasn’t a ship in sight. Really all you could do was just cower indoors and watch the lake with awe.

Some hardy souls (such as myself) ventured out to snap some pixs, but you were easily blown away by the winds, which gusted up to 46 mph on Saturday, which was the worst weather day.

Here’s an example of how the lake shore looked during our visit, versus when we’re usually visiting.

We drove north along the North Shore to Two Harbors, hoping to see some fall colors (we saw some, but it wasn’t peak yet) and caught more lake turbulence.

I was nearly washed off the eastern breakwater in Two Harbors where I was stupidly standing when one particularly enormous wave hit. 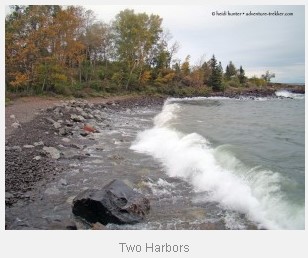 We had a third floor hotel room overlooking the boardwalk and our windows got soaked just from the spray from the waves hitting the rocks on the shore, it was that powerful. I couldn’t tell at times if it was raining, or if we were just getting wet from the spray off the lake.

After a wild night of rain, howling winds and splashing waves, the trees suddenly turned overnight, so we did get to see the fall colors after all.  We had a lovely walk in Banning State Park in Sandstone, MN (see prior article on Banning).

Come visit the North Shore of Minnesota in fall.  You never know what season you might get.