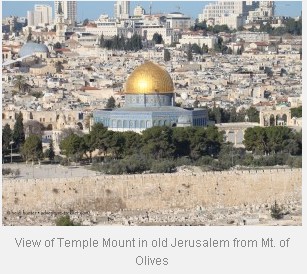 It’s been a while since my initial post on my trip to Israel (See my exploits floating in the Dead Sea), but I’m back with my second favorite stop on the trip – the city of old Jerusalem. This post will be in more than one article, so stop back to read the rest.

Jerusalem means the City of Peace and is the capital of Israel and the largest city. You always say you’re going “up” to Jerusalem.

Modern Jerusalem has about 800,000 people and looks like any other large city.  However, within modern Jerusalem rests the 1-square kilometer walled city of old Jerusalem.  In 1538 the wall was built and it took 3 years. The new wall is 500 years old.  There are Christian, Jewish, Muslim and Armenian quarters in the old city.  40,000 people live in the old city, most in the Muslim quarter. 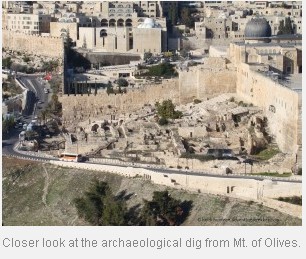 Old Jerusalem is obviously full of history, but it’s also full of religion.   Some of the most important events in Christianity occurred in places now within the walled city –   where it is believed Jesus was crucified, died and was buried.   It’s hard to go to Israel and avoid the religious aspects, which also affect the politics, particularly in the West Bank where Jerusalem is located.  75% of residents of Israel are Jewish, 2% Christian and the rest Muslim and various other religions. 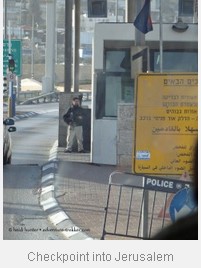 However, most people in Jerusalem are Muslim.  Jerusalem has become the 3rd most holy place after Mecca and Medina. Two mosques were built in the 7th or 8th century and were used as churches during the Crusader period.

These travelogs on old Jerusalem and not written to take any political or religious stand on what is happening in the area, but to be enjoyed for the rich history and beautiful scenery of the area.

The old city appears much larger from the outside than when walking around on the inside.  To get the best view of the old city as a whole, head first to Mount of Olives.  Downhill from Mount of Olives is Kidron Valley and at the lower end of the valley is the Garden of 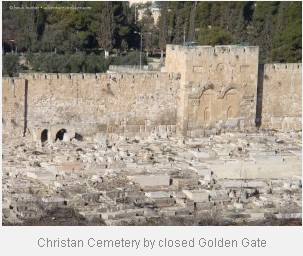 Gethsemane.   Just across the valley in the wall there used to be a gate into the old city.  The sealed gate is known as the Golden Gate,

which is the wrong translation of the correct name, Oreya gate, which means the Beautiful Gate (oro means ‘gold’, hence the error).

Mount of Olives has little in the way of olive trees, but hoards of hucksters and tourists and even a donkey and camel you can ride.

Looking down from the Mt of Olives, Jerusalem has 7 open gates (one of which is called Dung Gate, where garbage was taken out) and one sealed (the Golden Gate).  The northern wall is the weakest (it is the only side not surrounded by valley). Kidron Valley is on the east (aka Valley of Josaphat).  We could see the Dome of the Rock (i.e., Temple Mount) inside old Jerusalem.  There is a temple (now in ruins) just outside the south side, where the archeological dig is occurring.  Looking up beyond the old city, we could see the approximate site of the Last Supper on the hill – a church and grey roofed building with pillars now stands there.

We could just see Antonia Fort inside Jerusalem where Jesus was taken for the crucifixion (a brown building next to a tower).

There are lots of cemeteries surrounding old Jerusalem for when the final judgment occurs (Jewish right below us, Christian down in the valley closer to Jerusalem).  Oskar Schindler is buried in the Christian cemetery here in Jerusalem.

We could see a gold-domed church in the valley below us, which was built by the mom of the Tsar of Russia and dedicated to Mary Magdalene and is now a nunnery.

A large white church near the Garden is dedicated to St. Stephen, the 1st martyr, who was taken out of Jerusalem to the valley and stoned.

An apocalyptic group has a webcam looking for Jesus to return to Mount of Olives when the world ends.  This is the place where Jesus ascended into heaven. 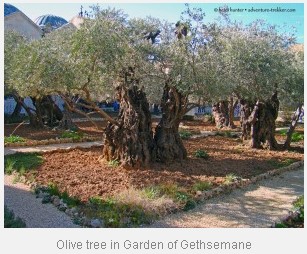 We bussed (we didn’t do the Palm Sunday walk) down to the Garden of Gethsemane next. This place was unexpected. It is a small courtyard with eight olive trees over 2000 years old. Gethsemane means “oil press”.  The garden was private property, owned by either Mary’s parents or Joseph’s brother. Jesus came here often and it was here the soldiers arrested him before the crucifixion after he was betrayed by Judas. 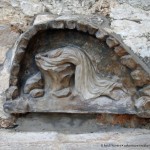 The garden is now the courtyard of the Church of Nations, which was built over earlier Byzantine and Crusader churches.

There are 12 domes representing the 12 disciples.  There is also the Rock of Agony, half in and half out of the church, where Jesus prayed.

The church has a 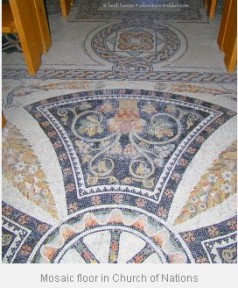 mosaic floor and there is one area where they show the earlier mosaic floor from another church. We touched one of the olive trees on our way by. Felt petrified.

Next we entered the old city of Jerusalem, and in my next article I’ll discuss the archaeological dig of the Second Temple, the Wailing Wall and the Temple Mount. 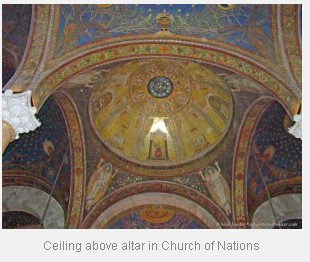