Southwestern Ireland is best known to tourists for the Ring of Kerry and its gateway city of Killarney.  I discovered a more enjoyable alternative – Kenmare.  Closely situated to the “three rings” and near Killarney National Park, Kenmare is the perfect location to see amazing scenery, visit historic sites, shop, experience Irish culture and observe wildlife.

Kenmare is an easy jumping off point to the three scenic drives of Dingle Peninsula, Ring of Kerry and the lesser known Beara Peninsula.

You will discover beautiful views, archaeological ruins, and ancient sites on your drive

around the Dingle Peninsula.  I recommend driving it yourself if you can; you will be able to stop where you want and although we heard traffic on the Peninsula was supposed to be bad, it wasn’t at all.  We didn’t meet a lot of tour busses either, as we were warned we would.

The panoramas, such as from Slea Head, were stunning; not just the oceanscapes, but the countryside as well.  There were cloud-covered mountains and expansive views of farms with plots that are squared off by trees, rocks, cattle and sheep. This is what we though Ireland would look like.

Archaeological ruins include beehive huts, old forts, ancient monasteries and churches, and famine cottages.  Historic areas include the Blasket Islands, which you can see from the Peninsula, and the Blasket Center which describes the history of the islands, which were still inhabited until the middle of the 20th century.

We enjoyed this drive so much, I’ll describe it in more detail in my next post. 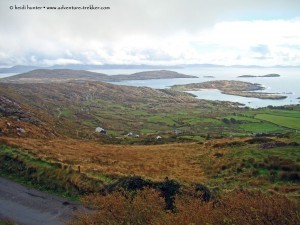 Killarney is the best starting point for the Ring of Kerry, although you can start it from Kenmare as well.  You can either join a tour or drive.  I would suggest if you’re brave that you drive; the roads are incredibly narrow, but you can stop at any of the scenic overlooks that you like, avoid the tourist traps, and avoid sitting on a crowded bus where you might not have a clear view out the window – and you want a clear view of the landscapes.

I, unfortunately, took a tour.  The first stop was about 15 minutes in, at a not scenic place where we could either go into the restaurant or pay €5 to go into the Bog Museum Village which had tourist trap written all over it. I eventually paid up, and saw two raggedy Afghan Wolfhounds, a bunch of recreated homes of past inhabitants of the bogs and one “rare” Kerry bog pony, looking forlorn and lonely in the rain. 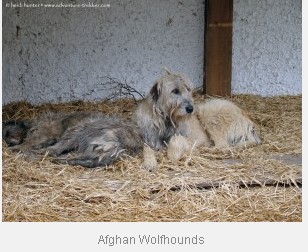 We stopped twice more at picturesque spots prior to lunch.  We also saw Daniel O’Connell’s birthplace in ruins (Daniel O’Connell is a hero in Ireland.  He led  the battle to win political rights for Irish Roman Catholics), and at the scenic overlook right before lunch someone brought baby goats and let us pet and take pictures of them. A little black one nibbled my finger and I could’ve spent all day with them.

The tour also included a stop at Ladies View as we drove through Moll’s Gap. Ladies’ View is where Queen Victoria came to sightsee.

The Beara Peninsula is a less traveled tourist route and it’s more rugged.  We saw some nice views, although nothing as spectacular as Dingle, and we got lost in a major way and ended up driving the Irish countryside on a road no better than a cowpath.  We eventually found our way back to the loop and traveled on. That is all part of the Irish adventure, however.  If you drive, you will get lost several times as the roads and maps aren’t always well marked, and you never know what you might see.

Kenmare has several pubs, and we were fortunate to be there on a Thursday night, when three of the pubs were offering live Irish music.  I’ll describe our bar hopping in a later chapter.

Kenmare has some nice stores and restaurants and colorful shops.  We bought a lot of souvenirs at Quills Woolen Market, a store with locations in other towns, such as Sneem and Killarney on the Ring of Kerry.  You can find pretty much anything you want here; we snapped up a lot of linens and a sheepskin rug. 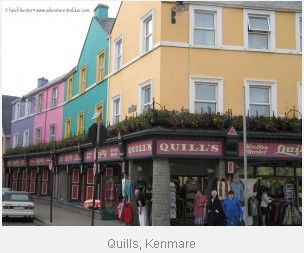 We dined one night at Prego’s, a very popular Italian restaurant, and had 3-cheese pizza with pepperoni and bruschetta which were quite delicious.  From my time in Ireland, I discovered Italian food is quite popular, but sometimes bland.  This was one of the exceptions.

Out in Kenmare Bay is a rocky island with a seal colony.  We took a SeaFari out to see them.  It’s a family owned operation – Raymond Ross runs a boat around Kenmare river to see the seal colony. His son (Patrick) and a couple of employees were part of the crew.  There were about 47 tourists on the boat, mostly Americans.   We all arrived promptly at 3 p.m. for the SeaFari; Raymond and the rest of the staff showed up between 20-30 minutes later – time is a guideline in Ireland, so don’t be in a hurry.

It was cold on the boat, but we received wool blankets to curl up in.  The excursion was two hours long (more like three hours once we took off – the Irish clock).  At the beginning was a lecture on the bay and topography (Cork and Kerry Mountains), nearby

small islands and wildlife (cormorant birds and clam eating foxes).  Then we approached the wild seal colony, which consisted of about 70 females lying on the rocks waiting to give birth at any second (we were there in late June).  They basically, slept; some looked mildly interested in us, but they didn’t do much, which was okay.  We cut the engines to drift around them so we wouldn’t startle them. We had to stay quiet and not move suddenly, as well.

On the way back to the harbor, they served coffee, tea, cookies, sweets and rum (yes, the son spiked people’s drinks with rum). The female employee entertained us with the fiddle music (selections from Fiddler on the Roof) and as we pulled back into port Patrick serenaded us with accordion music (the accordion is really popular here).  Raymond, our captain/narrator, had a really bad sense of humor and he’d occasionally break into song, so for our €20 we got a boat ride, seal sightseeing, comedy, refreshments, entertainment and some company. We enjoyed it; real Irish entertainment.

We stayed at the Sheen Falls Lodge, a sprawling (and orange) hotel in Kenmare.  The room is basic (nice marble bathroom, though, with separate shower and tub) and we had a nice view of the Sheen River.  The river is lit at night and we could hear the river and see Sheen Waterfall from our room.  Draw a map from the lobby to your room, however, as this was a difficult hotel to navigate.

The lodge has some nice walks, including the River Walk and Queens Walk. The Queens Walk contains some old and rare plants and flowers.  The River Walk winds along the River Sheen and Sheen Falls. Horseback riding and salmon fishing are also available at the hotel.

If you want to go

We planned our driving trip of Ireland through Authentic Ireland, who was great about suggesting routes and different types of lodgings (B and B, hotel, castles, and inns).  They reserved the lodging and the rental car for us. 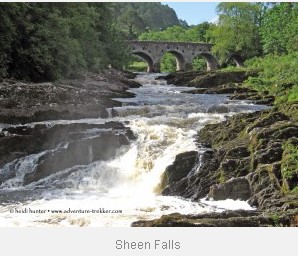